Persepolis: An ancient complex that is magnificent and ceremonial. This complex was built as the new capital of the Achaemenids in the land of the Persians. During the reign of the Pahlavi dynasty, Mohammad Reza Shah Pahlavi held celebrations of two thousand five hundred years of the Persian Empire in the Persepolis complex. After the Islamic Revolution of Iran, the Persepolis complex was considered a relic of kings. But today, Persepolis can be considered the most lovable structure in Iran and among Iranians, as well as a symbol of the glory of the past.

After the Iranian Revolution of 1978, some extremists tried to destroy Persepolis by attacking Persepolis, but failed due to the opposition and resistance of local officials and people.

The construction of Persepolis complex in shiraz

The founder of this city was Darius the Great, but in later times, the sons of Darius the Great added buildings to this complex and expanded it. All the information that is available from the Achaemenid period is due to the tablets and inscriptions of this collection. After the arrival of Islam in Iran, this complex was called the collection of a thousand pillars or forty minarets. The oldest constructions of Persepolis date back to 518 BC. The construction of Persepolis complex in Shiraz has started on the western slope of Rahma or Mitra or Mehr mountains.

The Persepolis complex in shiraz was burnt down by Alexander the Great in 330 BC, and all the buildings in the Persepolis complex in shiraz remained in ruins. Remains and half-ruined buildings include the main entrance of Persepolis, which is known as Apadana Palace, and consists of a central hall with 36 columns and three 12-column porches in the northern, southern and eastern parts, whose north and east porches Opposite yards are connected and connected. The height of the plateau at the site of Apadana Palace is 16 meters and the height of its columns is 18 meters.

The architects, artists and specialists who were involved in the construction of the Persepolis complex in shiraz were composed of different nations under the influence of Achaemenid kings such as Assyrians, Egyptians, Uratuians, Babylonians, Ludians, Ionians, Hindus, Scythians, etc.

Drawings designed on the walls

In the Persepolis petroglyphs, no one can be seen in a state of disgrace, and the representatives of the nations are designed as a member of the great world community with an independent and dependent personality. In the Persepolis petroglyphs, the distance of each nation is separated by a cypress tree, which is a sacred tree. The classification of the representatives of nations is based on their culture and history or their distance and proximity. It is the guide of nations, Persian and material or Elamite, which is designated hand in hand to guide other nations, and people of all nations were free to use their clothes, culture and language. No attempt can be made to show the superiority or pride of the Persians over other nations. Representatives of the nations have extended their arms to each other as a sign of friendship. Having a cane is a sign of high position and rank, a long-striped hat is a sign of military status and a simple long hat is a sign of greatness and a short cylindrical hat is a sign of a court official and a royal guard and servants. The lithographic design of the Persepolis donors, each of whom climbs a flight of stairs carrying a gift. This design has been used in Hadish Palace (private palace of Xerxes Shah) and Thatcher Palace (private palace of Darius the Great). One of the unique features of Achaemenid masonry and architecture is carved and engraved boulders that are placed in the walls of stairs-passages that lead to the halls and palaces of celebrations and ceremonies.

The entrance to the platform is two steps facing each other in the northwestern part of the complex, which are like hands that bend their elbows and try to lift their enthusiasts off the ground and place them in their chests. These stairs have 111 wide and short stairs (10 cm high) on each side. This low height of the stairs for the comfort and grandeur of the guests (whose pictures are embossed on the walls of Persepolis in luxurious and long clothes) to be maintained when climbing.

At the top of the stairs is the entrance to Persepolis, the Great Gate or the Gate of Xerxes or the Gate of the Nations. The height of this building is 10 meters. This building had a main entrance and two exits, and today the remains of its gates are still standing. On the west and east gates, there is a design of winged men and a design of two stone cows with human heads. These gates are decorated at the top with six cuneiform inscriptions. After mentioning the name of Ahuramazda, these inscriptions briefly state that: “Everything that is beautiful is done at the request of Urmazd.”

Apadana Palace or Bar Palace is one of the oldest palaces in Persepolis. This palace, which was built by the order of Darius the Great, was used to hold Nowruz celebrations and to receive representatives of countries dependent on the presence of the king. Apadana Palace has two sets of stairs in the north and east. The eastern stairs of this palace consist of two stairs, one to the south and the other to the north. On the walls of the stairs facing north, there are roles of high-ranking military and Persian military commanders. In these paintings, there are lotus flowers in the hands of these commanders. In front of the paintings of these military commanders, people of the Eternal Guard are seen paying their respects. In the upper row of this wall, you can see the image of people who are taking gifts to the palace. On the wall of the stairs facing south, the image of the representatives of different countries can be seen along with the gifts in hand.

The word Thatcher or Techra means winter house. This palace was the private palace of Darius the Great and was built by his order and in this inscription, he wrote: “I, Darius, built Thatcher”. There are twelve columns in this palace. On the door of this palace, there is a picture of the king and his servants, one of whom carries a shawl and the other holds a canopy. The staircase wall shows the servants taking the animals and the covered containers to the party.

Based on the evidence, it can be said that the king held discussions and consultations with the elders in this palace, and also based on the designed roles, it shows that the king entered through one door and the other two gates outside. On the walls of this palace, the role of a human head can be seen, whose head is a symbol of thought.

This palace is located at the highest point of the Persepolis complex and was the private palace of Khoshyar Shah. This palace was connected to the Queen’s Palace through two plates. Due to the hatred of the Athenians for the burning of Athens by Xerxes, they started the burning of Persepolis complex from this palace. According to the name of Xerxes Shah’s second wife, Hadish, this palace is called Hadish, which means tall. 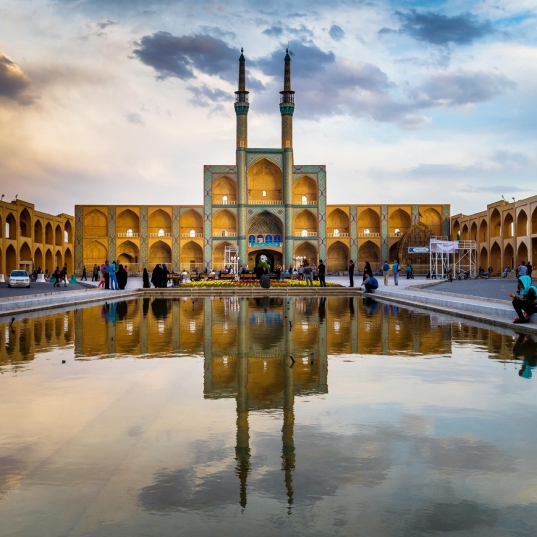 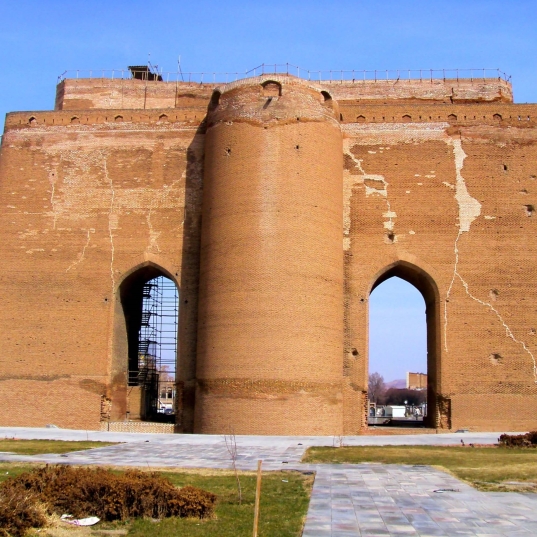 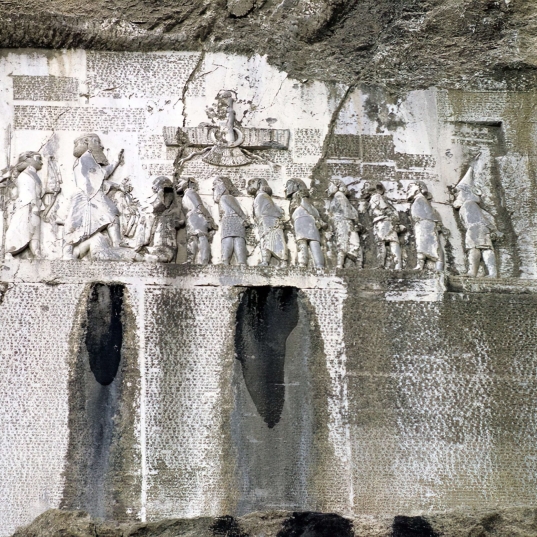 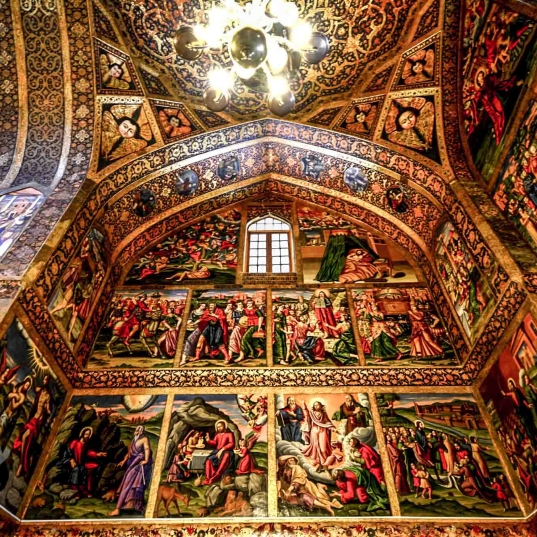 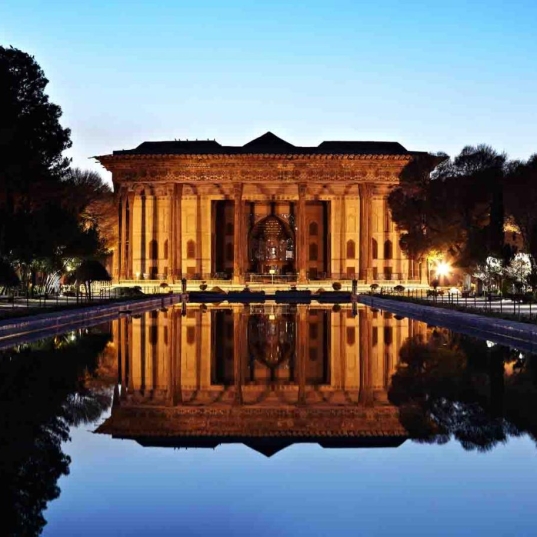